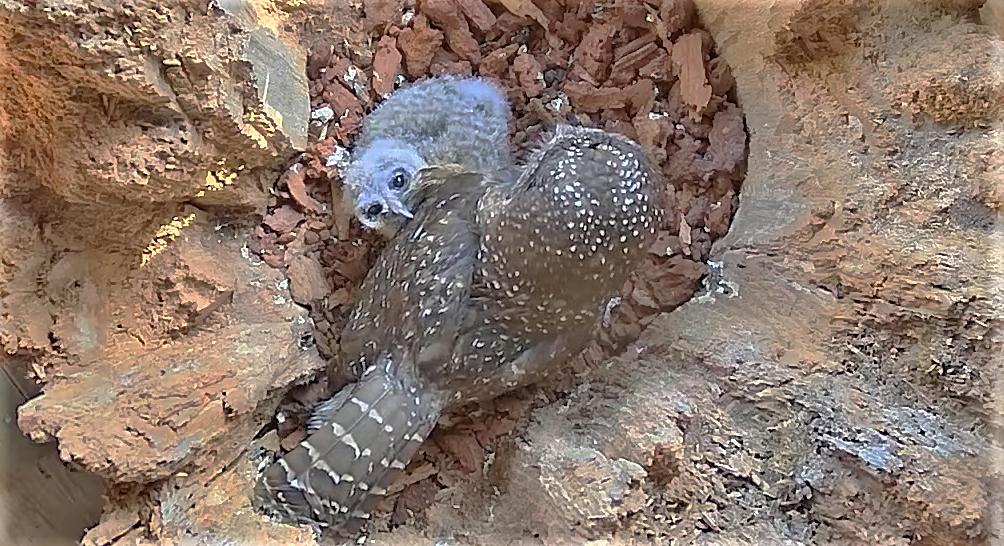 There is good news for one of Canada’s most endangered species.

Northern spotted owls Jay and Bella welcome a new chick this year. Named D-22, the chick was born earlier this year and is in the care of two resident adult birds under the Northern Spotted Owl Breeding Program (NSOBP) in Langley.

In an effort to raise awareness about rare owl species, the program has set up a webcam for people to watch D-22 grow up.

“She is exploring the nest a bit,” the organization said in a press release. “We expect her to fly away in the next ten days or so.”

The breeding program is the only one in the world for northern spotted owls.

“This year is shaping up to be an exciting one for everyone involved in the breeding program and we’re looking forward to the launch of live streaming so we can share our news with the world!” says coordinator Jasmine McCulligh.

The chick was born in April and was hand raised for a few weeks before Jay and Bella took over.

“Chick D is a female and the first that Jay and Bella have bred together,” the organization said in a statement. “Last year, their chicks were given to more experienced parents, but now Bella is taking on the role of adoptive mother and proving to be a birth mother!

Northern spotted owls are a rare bird to see; they are one of three subspecies of spotted owl and in Canada can only be found in southwestern British Columbia. Spotted owls in general are considered Near Threatened by the International Union for Conservation of Nature, but subspecies are not tracked.

In Canada, the NSOBP estimates that there are currently only 30; most of them are at the NSOBP facility.

“As this is the first and only breeding program for this species in the world, the team had to overcome challenges to better understand the behaviors and breeding techniques needed to successfully breed this species.” , notes the website of the organization.

Their goal is to release 10-20 owls into the wild each year to rehabilitate their population.

Every day the live stream starts again, so to see the most recent footage, visit the NSOBP YouTube channel.