This bear live-cam fishing in Alaska will make you whole 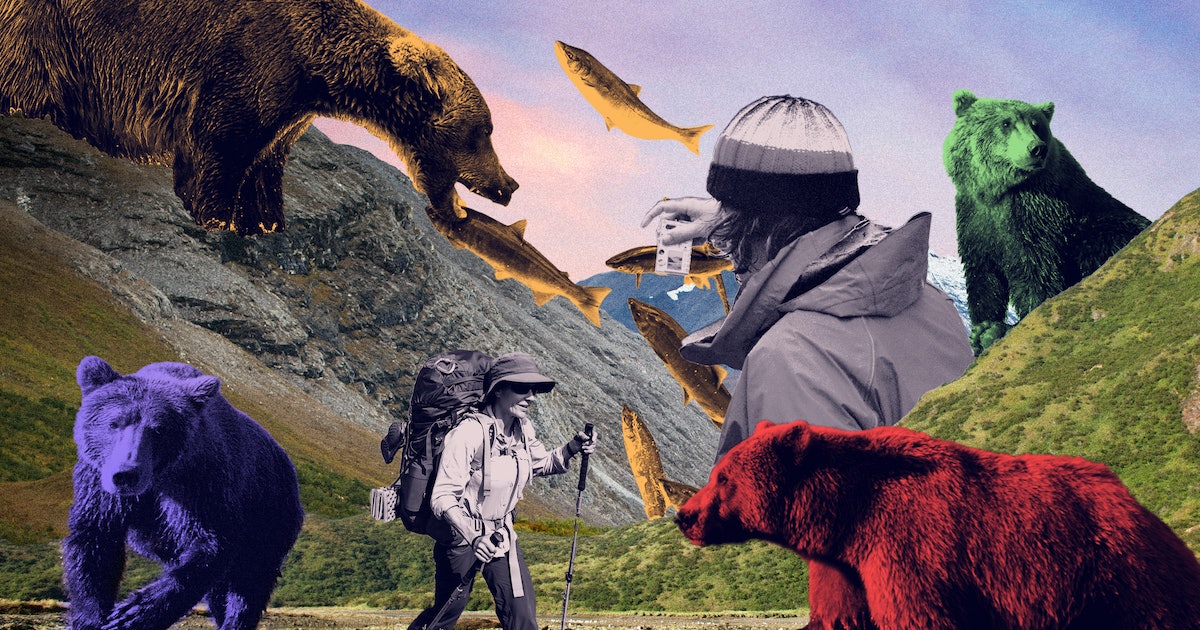 Everything collapses. Senators are insider trading. The algorithm relentlessly sells you the most lukewarm and tasteless version of your life. The last remaining industries are meal delivery apps, “cloud software” and threadbare money laundering programs. A charge has been deducted from your account and you are hearing about it for the first time. We oscillate between rage and soft nihilism and back again, and while this column won’t resolve that, it will provide you with a little good thing to appreciate, an acknowledgment of something strange and precious and beautiful, despite everything.

When I can’t sleep, I watch bears hunt salmon in a river in Alaska. There’s a live camera that’s streaming all day and won’t turn off until October, until the bears have become lewd champions and it’s time for them to drag themselves into the woods to hibernate. . “Bear 480,” or Otis, as biologists have named him, arrives at the river each June with visible ribs and pointed shoulders; in midsummer he sits curled up under a grassy rock protruding from the bank of the river, his huge stomach swaying between his legs like a conquering old lord alone in a castle.

I watch them all the time. I watch them early in the morning while I wait on the coffee maker, when the sun in Alaska is still too low and weak to distinguish the rocks from the creek and it almost seems like the bears are walking on water like a psychedelic dream.

I watch them when they’re side by side at midday, on the rocks overlooking a short waterfall, a row of motionless torsos standing like parked sedans, vigilantly scanning the action beneath the surface. Minutes of them like this. The constant, static white noise of the rushing stream; the chirping of gulls plunging on manic reconnaissance missions; the occasional sound of bears that is not a roar but rather an elongated growl instructive to anything nearby. As time goes by. Their bodies begin to sway, they open their mouths and suck in air as if detecting microscopic tracks of approaching salmon in the mist. They hold their big woolly paw in the breath of the water, analyzing the vibrations, each seemingly stupid gesture with a specific purpose, accumulating new information, calculating complex math, it’s all a mystery to me playing out inside. screen like a hypnotic, primitive dance. A salmon launches — chomp. He writhes in the bear’s jaws.

I lay awake until the middle of the lonely night, almost 2 a.m., 11 p.m. in Alaska, and watch the sun look like grapefruit flesh spread across the sky as it falls behind a row of spruce trees. . I sometimes look when the camera has gone into night vision and realize that the two flashing white dots on the rock above the waterfall are actually the eyes of a bear, still patiently fishing even in the dark .

There are bears with gnarled snouts and cool foot-long tears on their side, the implication of hidden violence, but in the river they are mostly peaceful, distracted by the fish , tranquilized by the water, almost oblivious to each other, staggering around like drunks coming out of a bar.

Early in the season, when salmon are most plentiful, bears eat only the highest calorie parts of the fish, the brains and skin and eggs, to gain weight most efficiently and as quickly as possible. They strip the fish down to its neon glowing flesh, bite off the head, and leave the rest to wash away with the current. It’s the sophistication of the bears, their plans are impeccable. They spend long periods without moving but they rarely lose time.

In summer, bears sometimes stay awake for up to 20 hours a day, eating tirelessly. They are capable of wild and sudden acts of violence but are generally curious, slow-moving, gentle. They have a look on their face and a posture of impenetrable calm, as if a vast and maddening cosmos had cleared up for them long ago and every day here and now for them is a vacation. They are gigantic; they are nimble. Something with the weight and proportions of your uncle’s basement couch perched on damp rocks for 15 minutes at a time. It’s like a ballerina could decapitate you.

They don’t live like me, dismantled by existential enigmas, the creep of the apocalypse; they are not bombarded with doubt and shame, do not care about their stature. They are not discouraged by the salmon passing in front of them nor proud of the salmon they catch. They just stand there like great humming machines running. They are like this out of duty.

All day long we are pulverized by dispatches from scientists, scenes of remote rainforests plundered, atrocities perpetrated by forest conglomerates. Towns hit temperatures which are described as “anomalities”, until one day in a short time when they can be remembered as modest and happily livable. Flights are grounded because the tar on the runways at London airports has started to melt. The Rio Grande dries up for the first time in 40 years. Hailstones bigger than you ever remember. Tornadoes crawling through seemingly impenetrable metropolises.

It feels more and more like looking out the porthole of a stinky, foul-smelling ocean liner into something beautiful and glistening beyond. Mountains, wolves, bears. At the wheel, whistling, hideous billionaires who sneer among themselves with sad locks of hair. Rich men but without passions, Data but no memories. They are incapable of anything you might recognize as human sadness and rarely even shame or regret, rather some sort of carefully crafted expression of dark inconvenience, “It’s really terrible that you have to be outside to demonstrate in the streets like this.” Something that doesn’t involve them at all and feigns solidarity, while promising a vague resolve for whatever happens, as long as it doesn’t involve them betraying their dealings with cops or jowly real estate barons or one of the ling-dipped cryptmen at all their Martha’s Vineyard parties.

But here there are dozens of bears in a constantly spitting abundant supply of water. The bears never come home because their home is this river, the river and the bear belong to each other and all of this together is something big and real. Observe the bears on the rocks then imagine next to them a entrepreneur, imagine a Chris Evans movie, imagine a faulty Tesla. Imagine a leach from a venture capital firm telling you about its vision while closing the place where you work; imagine him sitting nervous and impatient on the rocks, staring at the salmon and wondering if it could all be improved with a cross-platform content strategy. The bear is perfect technology, it is fierce, it is Holyit’s eternal in a way that tech overlords fantasizing about messianic legacies could never comprehend.

In spring and summer, tourists gather on a wooden bridge overlooking the falls, huddled together like paparazzi.

I feel like that and I believe that I am not alone. In the related videos sidebar there are scenes of these bear cams that random people have cut and posted, some of them with less than 500 views by accounts that haven’t posted anything else . In the chat running alongside the live camera, people refer to individual bears by name and ID number; there are websites dedicated to recording every appearance of each of them. They applaud their creativity and dexterity. They study their behavior and hunting methods. In spring and summer, tourists gather on a wooden bridge overlooking the falls, huddled together like paparazzi.

There are caves in France with bear paintings on the walls that date back 32,000 years. Scientists believe that as Neanderthals evolved and sought shelter from the cold, they moved into the caves where bears had historically hibernated, pushing them outside in temperatures so brutal that the newly formed glaciers had begun to reshape the mountains. Thousands of years have passed; eventually the entire species disappeared. And in the caves in the dark the humans huddled together and in the stinging firelight they imagined these bears and drew their image on rocks. Scientists believe that in the beginning, for some time, bear and man may even have shared these caves. In the painting in France, there is an adult, almost getting ready for something, and behind him a little one with a serene look on his face. They face forward; it looks like they are going somewhere.

At 1:03 a.m. on July 22 in Chicago – 10:03 p.m. in Alaska; sun still out but planning his way out – watched a single bear standing under the falls, shoulder-deep in the creek which was not moving, the water was bubbling around his neck like a jacuzzi, all alone apart from the gulls casuals who made sudden landings next to the bear whose concentration never broke. I waited and waited for the bear to spot a fish, an athletic lunge, for the streak to pick up speed as I saw it on the rocks in daylight. I started closing my eyes. The bear would be there for as long as it took, until the sun went down and the camera went black and gray and it was just a big paunchy figure, licking its lips and conceiving new planes. It is the nature of bears. They sleep for months, they barely sleep.